Sir
I feel equally disappointed and mortified at not being able to send you more than the two inclosed Bills one for £150 the other for £50 making together £250 Sterling which is the whole I have been able to receive by this Packet.  You have also the duplicate of the Bill sent you in my last of the 27th June for £76 Sterling before this I was in hopes of being on my passage to England but the not being able to settle your accounts has prevented me but I trust by the next Packet or at furthest by the following one to finally close them; I shall then take my passage in a Packet.  My own Private Accounts I shall unavoidably be obliged to leave unsettled. I have written to St Kitt’s respecting Mr Rawlins’s business, have not yet received an answer, but suppose I shall by the return of the Mail Boat.
I am sorry to say we are stricken (?) very dry at Barbuda they have not had a drop of water in the Cistern for the last four months.  On Friday last we had a pretty severe Gale.  I was in hopes it would have been attached with rain but it went off without it, the Gale was not sufficient to do us any injury; I was obliged to send a small Vessel which was there to sea she returned in the Evening with her sales & rigging much damaged; she fortunately had on board a load of Corn for Antigua which prevented her been driven to Leeward. Notwithstanding the drought I have pleasure to say that the stock as yet have not suffered they have been constantly fed on Hay, & are now making the risks look small but I trust we shall have enough to last us much longer than the dry weather can possibly last fortunately both the North & South sides of the Island have had occasional showers, it is only the middle which is suffering. I am
Sir
Your Most Obedient Humble
Servant
(signed) John James 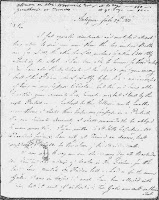 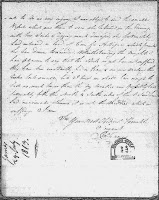 Per Geo Hibbert Capt Head
I have shipped for you six Green Turtle. 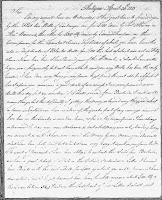 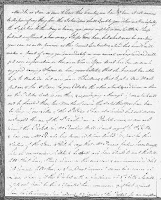 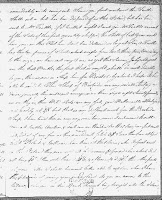 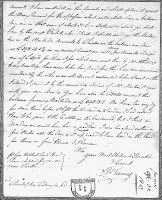 As you will of course hear of the Gale which took place here on the first Instant, I think it necessary to mention it to you,  otherwise the effects of it at Barbuda was so very trifling that I should not have thought it worth notice, it certainly blew hard, but when compared with the Gale of last year it was a mere nothing, it began about 1 o’clock in the morning, and continue till after daylight, from having felt the effects of last years Gale this of course kept me the whole time on the look out; one of the vessels I had sent off with sheep the day before, she was in St Johns Harbour & is safe, the other is still on shore at the ?? but I believe not injured; the small one was with me, & I was very apprehensive for her safety till morning, but she fortunately rode it out without any other accident than the top of her boat which was wrecked to pieces on the Beach, in fact the Gale may be said from the rain which fell at the time to have done us a most ?? of service, before we were extremely dry, & our Corn suffering consequently, I was very apprehensive that one piece of about 170 acres would have been entirely lost, but I now trust that this rain will establish it, I have about 250 acres in all planted which I now hope will turn ??. Our yams are also greatly benefited.
I am sorry to inform you that as yet I have not obtained payment from Black, I have been waiting the whole of this week, & and now promised bills about Monday or Tuesday night as his accounts with his companions at English Harbour cannot be settled until then, but as the regular boat follows this packet this morning I am obliged to send off this without them, but should another boat follow which in all probability there will & I can get the Bills they shall be forwarded.
Herewith you will receive a Bill for £250 Stlg drawn by Thos. Allman on Alex Worswick Esqr of Lancaster, which will leave a balance due you on the accounts sent of £787: 7: 1 ½ Currency; & which I hope Mr Black will enable me to forward by this present Packet, there is now due from Mr Black about £1300 -

your most obedient servant 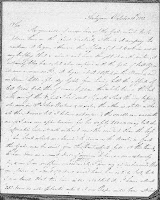 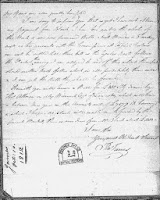