Clare Hall Jany 14th 1823
Sir.
It is with much pleasure I now inform you the weather has been such for some time back that the Canes in this Estate have improved beyond all expectation particularly on the higher Lands; but they will be very late we cannot begin(?) for the next two months when I first came here it was the general opinion that the Estate could not make twenty Hdds (Hogheads)  I may now venture to say we shall at least make Eighty, & I hope the manure and lime I am now bringing from Barbuda will soon get the Estate in good Heart, the vessel is employed in this work when not engaged for your windward Estates. The George Hibbert with the stores for this Estate arrived here last week.
The weather at Barbuda has also been good and I trust we shall have a good supply of Guinea Corn. The demand for Cattle is extremely dull; I have offered Oxen at one half they formally sold for, Mr Osborn yesterday informed me he could buy the best Oxen in this Island for twenty pounds currency per Head, he must have some for this Estate to enable us to get the manure to it, and I have some idea of sending the very poor to Barbuda to fatten.  Having been at Barbuda during the Xtmas I have not been able to get an exact list of the Debts due in this Island sent by this Packet but as soon as it can be accurately made out it shall be sent for your instructions. I remain
Sir
Your Most Obedient Humble
Servant
(signed) John James 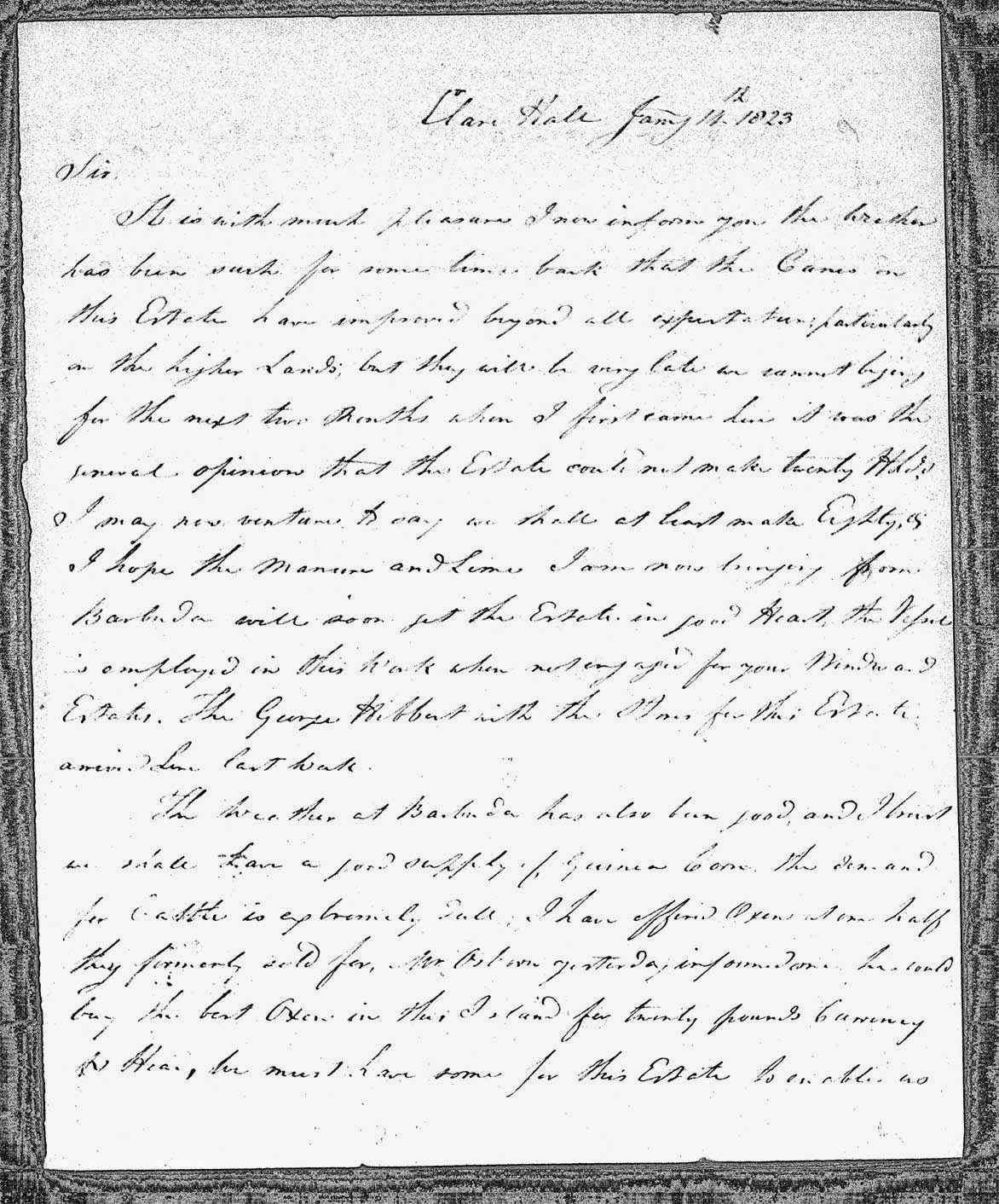 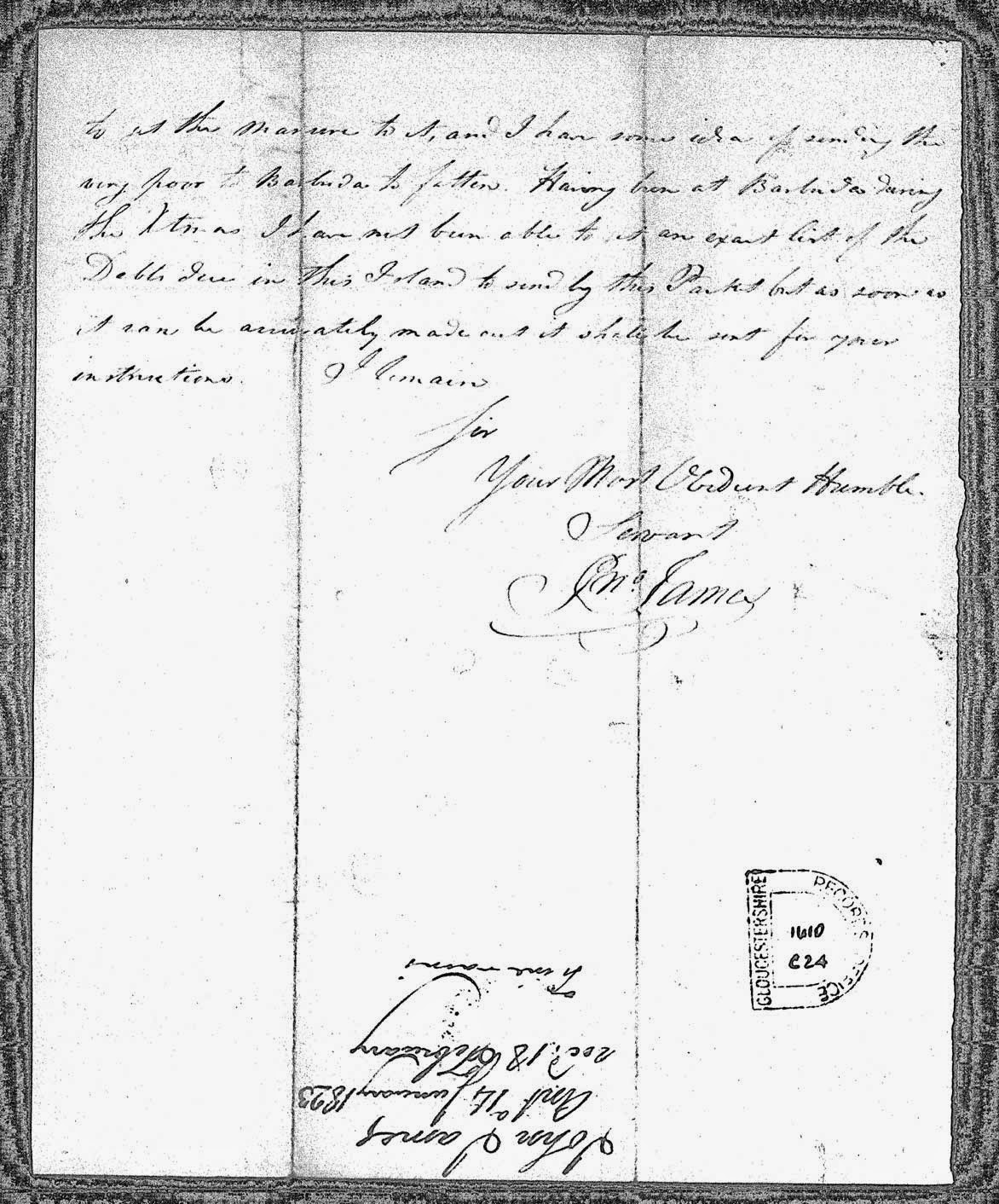 Accessed through Simon Fraser University library
Posted by Kyle Scott at 13:10 No comments:

Antigua Novr 16th 1821
Sir.
Inclosed I have the pleasure to send you Mr Joshua Kentish‘s Bill on John Blackburn Esqr London for £156:13:3 Sterling being the amount of salvagers of three vessels wrecked on Barbuda as per account which you will receive together with the Island Accounts and the triannial returns of the Negroes which I have sent off this morning by the Brig Adelphi to the care of Mr Trattle, I have also sent by the same Brig the ten Puncheons of Rum the salvage of the Rum saved from the ship Hound two I have left for the use of the Island and it required nearly another to fill the ten up. I fear it will not sell for much but it could not be disposed of here as it would be subject to that colonial duty of 2/6 per Gallon full one third more than it would sell for the Bill of lading I have sent to Mr Trattle. It is with much regret I am not able to send you a Bill for the balance of Robertsons money it has been daily promised me for the last week but on the arrival of the mail Boat this morning I find myself again disappointed, the ship Martha will leave this some time the beginning of next week I shall do all in my power to send it by her there are no Courts open at this time of the year or I could not have been put off so often, since 11th September we have had a continuance of Rain say sometimes more than I could have wished for, it having laid the low lands completely underwater, & it is some time before we can get rid of it, in these grounds it has done some injury to the young Corn but I hope not very materially so, the Yam Crop will be very small as the greater part of the seed tried on the ground for want of rain, in fact before the rains in September not a blade of grass was to be picked on the Island which obliged me to use a good deal of last years Hay. I trust we shall have a good crop the season as pieces were shut up immediately the rains began.
The last wrecks have given me a good deal of trouble particularly the Hound, she was so far to Leeward of the Island as to oblige us frequently to sleep in the Boats, we never could get home in less than five Hours, in one instance we were very near losing some of our people, I was in the largest of our boats about 30 feet long & 19 feet 6inches Beam and had myself than steering her the greater part of the morning, & had not given the helm out of my hand half a minute when a gust of wind struck her she filled instantly and went down in sixteen feet water, I had ten men with me for of which could not swim & we were a mile & half from the shore after taking care of those that could not swim by securing them to the Oars we succeeded in getting the torn ballast net off (?)(Letter damaged) the Boat she then rose to the edge of the wreck(?)(Letter damaged) Lee shore under us in about an hour and half we all landed safe, having in the first instance thrown of my Coat, shoes & stockings I had about seven miles to walk without any, in the Brig with the Accounts I have sent a list of a few things required for the use of the Island, Clothing for the Negroes is the only thing of consequence they have not had any since 1818. I am
Sir
Your Most Obedient
Servant
(signed) John James 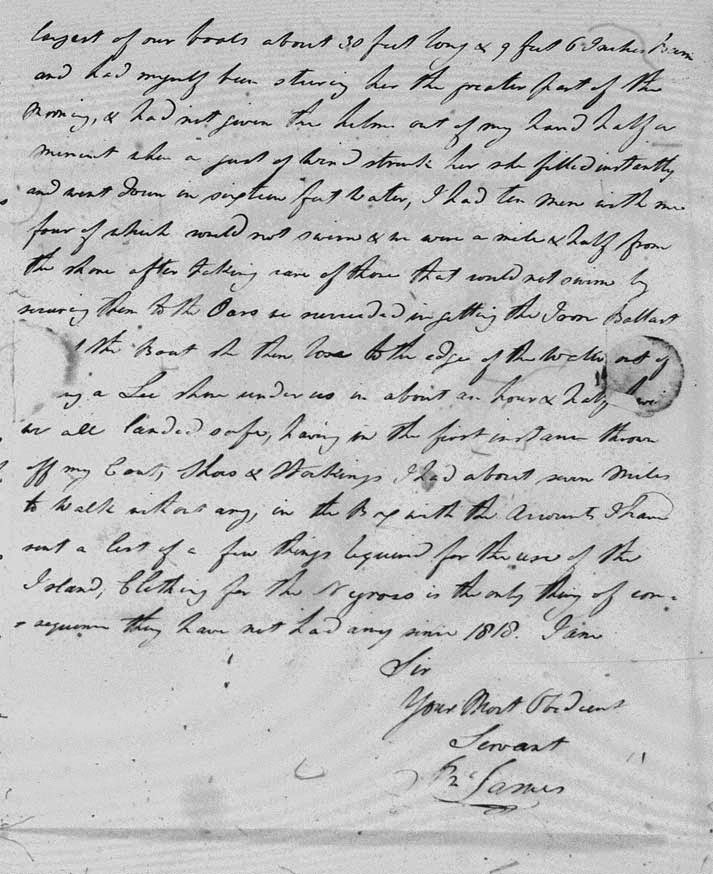 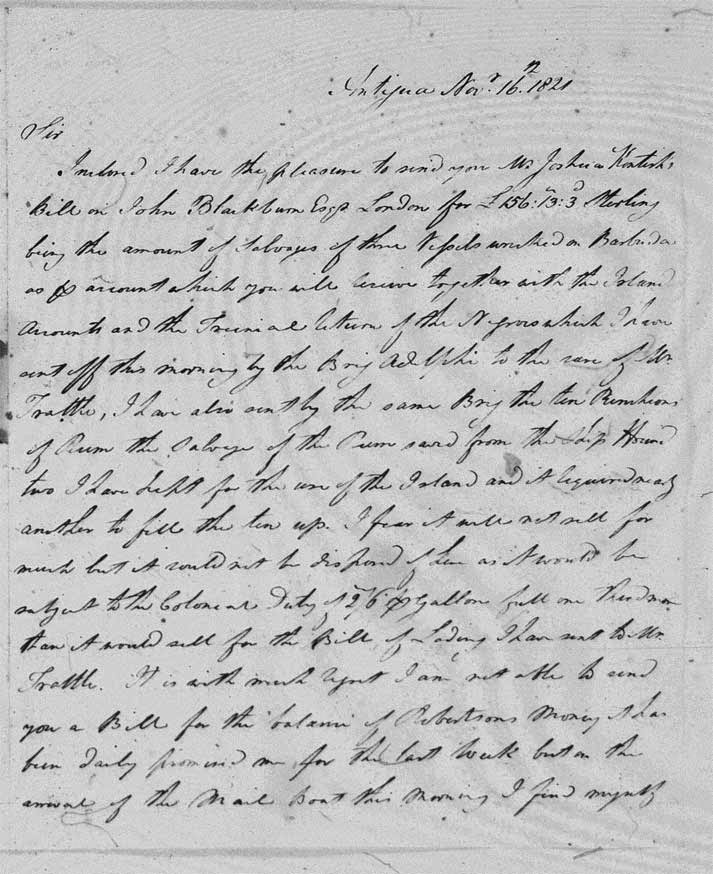 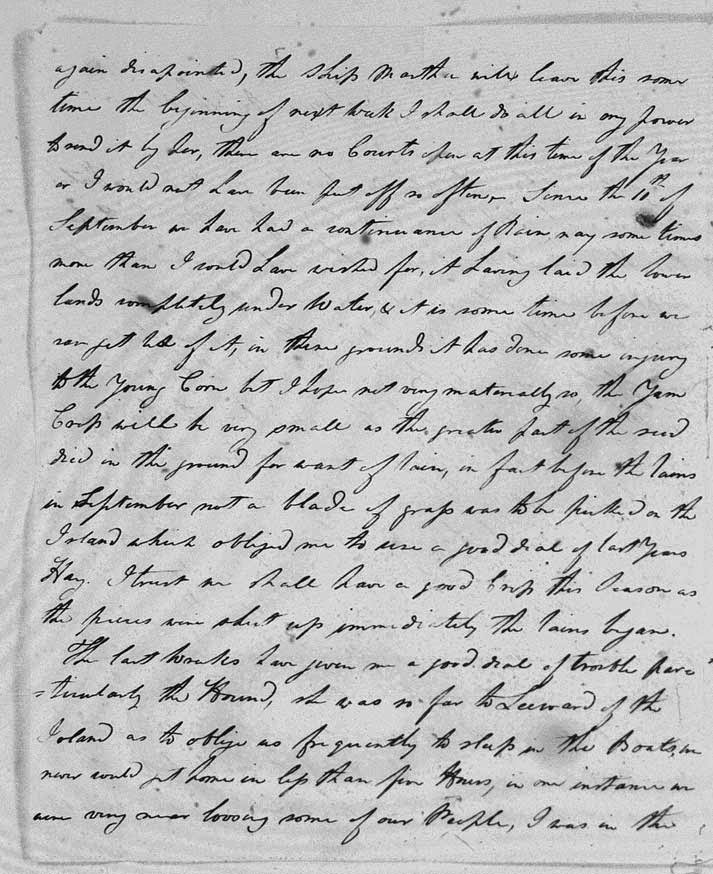