Barbuda August 10th 1812
Sir,
Since my last of the 30th (July ?)  another Packet has arrived, I went immediately to Antigua to endeavour to get Bills from Mr Black & Holloran but without effect, however I received on my own Account a Bill for £160 Sterling which I now forward you and which will receive, as well as the Bills and Accounts forwarded by the last Packet, & the ship Braganza; the Bill now enclosed will when Mr Blacks Accounts are settled more than pay you the amount of the Balance due from Barbuda, as per Account sent with my last.
On my return here on Saturday I found that H: M: Brig Opossum had just been got under sail she had run on shore on the morning of Thursday last, on the N: W: side of the Island, she had the good fortune to pass through the Reef, and only Grounded when close to the shore; she must have come at least a Mile & half through Rocks none of them more than three times her length from each other, this is the only place she could have so escaped in the whole of this side of the Island. Altho I was not present I am happy to find every exertion was made to get them off which succeeded, after she had been considered as lost by the Captain, and Officers, which appears by the Certificate the Captain has sent me.  Mr Walker the Overseer & thirty of our picked Men were on board her the whole time, of whose conduct & exertions Captn Morbrige speaks highly; a Copy of his Letter to me you will receive with this, her Guns were all thrown overboard tomorrow I shall endeavour to get them up. They also lost all their Anchors the last holding just long enough to enable them to make Sail, had it given way fare minutes sooner in all probability the whole trouble would have been lost.
Since my last we have had some rains but not as much as I would wish for, our Corn is all planted, but requires more rain to get it forward, the Pastures never looked better than at this time.  I fear we shall not sell much this Quarter, as I have declined sending any more Cattle or Sheep either to Black or Holloran until the Old Accounts are settled, should many Ships arrive at Antigua, they will find it difficult to supply them and will therefore be obliged to have recourse to me, consequently must settle the old Accounts. Black as applied to me to give them a general credit of six Months which I have told him I am not authorised to do.
Mr George Martin has sent me a Protest for the non-Acceptance of Mr Rawlins’s Bill for £354: 11: 4 Sterling I have written to Mr Rawlins on the Subject, tho I doubt not the Bill will be paid when due; he is I understand a man of large property in the Island of St Kitts. I am Sir
your most Obedient Humble
Servant
(signed) John James

(Copy)
H: M: Sloop Opossum off Barbuda
Augst 8th 1812
Sir
I should be much wanting did I omit mentioning to you the very great exertions of Mr Walker and the Men under his charge to him and them I feel indebted for the safety of the Ship, her situation was much as to leave me little or no hopes of saving her and nothing but the knowledge they had of the place I am convinced did it, but it is suffice it to say altho you was not on the spot, there could not have been more energy or zeal to save His Majestys Ship shown. In this all must have been well instructed; therefore request your Acceptance of my most grateful thanks trusting soon to have the pleasure of your acquaintance, and being able to return them personally.  I am Sir
yours very thankfully
(signed) J Mobridge
I have given Mr W a certificate and shall take care to do every thing for him on my arrival at Antigua which I request you will admit of fear the Boats are somewhat damag’d but trust a handsome remuneration will be granted I shall write you on the subject. 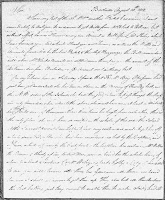 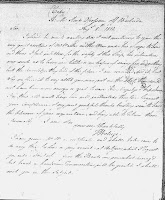 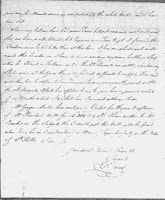 By the Ship Braganza which left this for Liverpool on Sunday last, I took the opportunity of forwarding to you the Barbuda Accounts to the end of June, accompanied by two of Black & Hays Bills for £250 Sterling each, another set of the same Bills will be sent with this; the balance referring  Barbuda by the Accounts sent is £2737: 18: 2. I have particularly to regret the not being able to forward the whole of it to you by this Packet; you will perceive that Messrs Black & Hay have been the principal Purchases, there remains now due from them £1325: 8: 2 & I have no prospect of getting it settled until the end of September, at which time they have promised the whole shall be paid. I shall decline furnishing them with any more Cattle until the former account is settled. There is also due from Haloran £346: 10 which he has promised to pay by the arrival of the next Packet, he is agent for supplying the Troops, his payments are guaranteed to one by the Deputy Commisary General residing here; as soon as I receive either of the sums it shall be forwarded to you.

I must confess that I feel much hurt at the deficiency in the present payment, particularly so as it is the first money I have had to send you since Mr Martins departure, I had every reason to expect that I should have received nearly the whole of it, but as Mr Martin will be with you about the time this can reach, he will be able to assure you that those dis- appointments are almost unavoidable on my part I have now many dues to me for Articles sold from Barbuda these years since, for which I have regularly accounted to you, thereby making them my own debts, could I have raised the money the present Balance should have been settled. With this you will all so receive the Wreck accounts for the last year, the amount of which has been paid to Mr Martin, I shall now take Credit for my Commission on the last two wrecks which I will state at the foot of this.

By the Brig Union for London I have shipped fifteen Bales of Cotton, all that is clean at present, there is about 3 or 4 Bales now to clean, what was reaped the first year was nearly all blown away in the Gale of last Year, as well as all the Year Plants then in the Ground destroyed, the Cotton I have now sent is chiefly from what old bushes the Gale left us.   It is with great pleasure I inform you that the Stock generally on the Island has for the last few years increased considerably, & this season the Calves are in greater abundance then they ever were, I have cut above 150 Bull Calves since Christmas. The Horses are also getting numerous in few years with any attention the builder will be able to send many Annually to the Island, and having had about 30 foals sent already this season. The American sheep which I purchased last year a healthy & have increased, the island sheep are looking well last Season droped five Lams at one time all of which she reared. We have now are plenty of feed, but have not been fortunate enough to get sufficient rains & get in much Corn, there is a large proportion of land ready. The Yams & Young Cotton are doing well.  I am Sir,

your most Obdt. Humble Servt 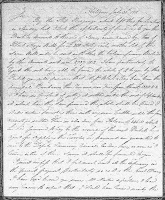 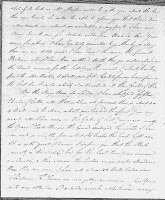 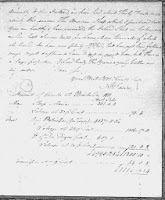 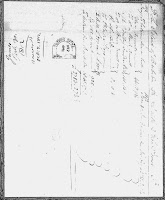 
Sir
Since my last another vessel has been wrecked on Barbuda, she is the Brig Adventure of Tortola, last from Lancaster, bound to St Croix; only partly laden; with dry Goods, Candles, Oil, Porter, Earthenware, & Bricks; the whole of which except the Bricks have been saved; altho in a place where no Boat could get alongside, the vessel bulged almost immediately consequently it has all been wet, but with the consent of the Captain I have had the whole dried; yesterday one of the vessels bought over part of it, I shall return tomorrow and send over the remainder, the Owners belonging to St Croix a Mr Robert Hyndman of this place who is a very reputable merchant has as a correspondent of the Owners Messrs.’ Ashton & Smyth, powered(?) on the Captain to put the business entirely into his hands, which with the consent of Mr Martin I have agreed to on his giving a Bond to pay the Salvage as soon as the Cargo is disposed of. I am sorry to say that the last week has been extremely Hot & Dry, which has been most against our Cotton & the Old Ground in consequence of it, & our attention being taken off to the wreck I have then obliged to abandon, the other ground is doing well, on Monday last it had a good rain for nearly an Hour & half but not a drop fell half a mile from it, the Yams being in the same piece had of course its share. I am
Sir
your most obedt. Humble servant
(signed) John James
Antigua August 23rd 1810 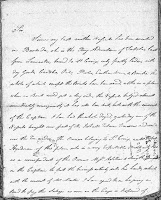 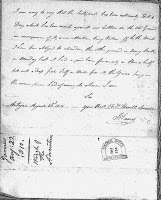 Sir
The salvage for the sloop Unicorn has been settled, the Gross amount of the sales is £1570. 15 the Magistrates have awarded you one third which is £523. 11. 8 but you will have to pay out of it £50 the hire of a Drougher that took over part of the Cargo, as well as some Lighterage; the reason of these being hired was, that, the wreck happened at a time when the Fleet was about sailing and when Mr Hodge was a good deal pressed & therefore required the Island vessels to get your Sugar down in time; the amount of the salvage I presume has been paid on this to Mr Martin.
The Island quarters accounts to 30th June I have left in Antigua to be forwarded to you by the Packet, the Balance of which is £1854. 11. 11 ½, the greatest part of which I have paid Mr Martin and I have no doubt but the whole is paid by this time, as I left the very particular directions Mr Boadley the agent to do it.
I have great pleasure in forming you that since my last we have had some very good rains particularly within the last week, in consequence of which the whole of the Yams are now in the Ground, and are doing well. I have also planted about 150 Acres with Cotton, one half of which is Now Land, and is looking as well as I could wish, the other half is in Land that has been cleared some years, and I fear from its present parents will not succeed, unless the weather continues to be favourable, however if the Cultivation is found to answer, I shall be unable to get if sufficient quantity of good Land cleared for another season. The stock over every description, from the great abundance of Pasture, all over the Island, are in as good condition as could be wished for; we have had a much larger quantity of Calves this season than I ever remember. The remainder of the last years yams I have now been able to dispose of, Admiral Cochrane has bought them at 12 (shilling symbol) per 112 lbs(?) for the Navy, a schooner sailed from this yesterday with 39 thousand weight.
I have sent to Antigua four Green Turtle, & three Barrels of Cashew Nuts to be forwarded to you by a ship belonging to Mr Trattle, and Sam which will sail I understand in a few days.
I have the honor to be
Sir
your most obedt. humble servant
(signed) John James 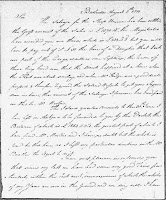 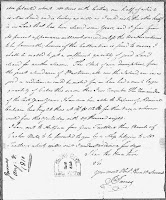